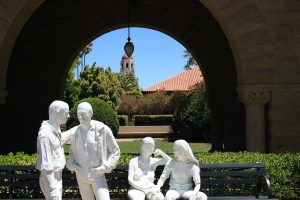 In this guide, I’ll list the GMAT scores needed for top business schools in the United States and explain what they mean. First, I’ll give you information on the average GMAT scores for top MBA programs across the country.  Next, I’ll talk about the upwards trend in GMAT scores. Why is this rising trend happening, and what does it mean for you? Finally, I’ll talk about goal setting in light of this information. If you’re looking to get into a top business school, what kind of score should you shoot for and why?

Have you heard of the M7?

The M7 is an informal grouping of the top seven MBA programs in the United States. The M7 includes Harvard, Stanford, Wharton (University of Pennsylvania), Kellogg (Northwestern University), Booth (University of Chicago), Columbia, and Sloan (Massachusetts Institute of Technology).

The M7 often represents a shining, seemingly unattainable dream for MBA applicants. But, while admission to these programs is undoubtedly selective, getting in isn’t impossible.

The best way to secure admission to one (or all) of these schools is to make sure your application, including your GMAT score, is as competitive as possible with other applicants. To do that, it’s important to understand what you’re up against in terms of the qualifications other applicants have. In the following chart, we’ll look at average GMAT scores for top MBA programs.

Overall, you can see that these scores come together in three main groups. Stanford and Wharton have the highest average scores, in the 730s, while Harvard, Kellogg, and Booth have average scores in the mid 720s. Finally, Columbia and Sloan have slightly lower average GMAT scores of 715 and 716, respectively.

*According to 2016 US News and World Report rankings.

I’ll talk about what these averages scores mean for you in a later section. For now, let’s look at the average GMAT scores needed for top business schools outside of the M7.

*According to 2016 US News and World Report rankings.

Is It True That GMAT Scores For Top Business Schools Are Rising?

But what does that actually mean? And, how do rising GMAT scores affect applicants?

Lower ranked MBA programs have seen substantial increases, too. For example, Michigan State’s Broad School of Management has seen its average GMAT score of its admitted students rise from 638 to 664.

Overall, the general trend of average GMAT scores for MBA applicants has been on the rise.

What Do Rising GMAT Scores for Top Business Schools Mean for Applicants?

While it may seem intimidating that the average GMAT scores of admitted applicants to MBA programs are on the rise, it’s not necessarily a negative thing.

The good news about the increased influence of test prep programs is that you, as an applicant, likely have the opportunity to do test prep of your own. Whether that means doing a self-paced study guide, or entering into a structured test prep class, there are endless options out there to help improve your score.

The bad news about rising GMAT scores is that more and more applicants are scoring higher and higher, which means it will be hard to stand out on GMAT score alone. As an applicant, it’s important to consider the rest of your application beyond just your GMAT score. If you have a solid GMAT score that is at or above the average GMAT score of your goal score, as well as a well-rounded application that highlights your other strengths, you stand a better chance at being accepted.

How Can You Set a Goal Score for the GMAT?

As you can tell from the average scores I’ve listed above, having a GMAT score above 700 puts you in a good place for being a competitive applicant at many of the top 20 MBA programs. But where you set your specific goal score depends on what specific schools you are applying to.

You’ll also want to take a full-length, official GMAT practice test when setting your goal score, which helps you see where you’re currently scoring. Most GMAT test takers can improve between 50 – 150 points on their initial practice GMAT score based on the amount of time and breadth of their studying. Making an improvement over 150 points, however, is extremely difficult. If you need to improve more than 150 points to meet your GMAT goal score, you’ll want to consider changing the schools you’re applying to or boosting the rest of your application to truly standout as an applicant.

Feel like you know all about the GMAT scores for top business schools, but still looking to learn more about how to make the rest of your application competitive? In our guide to how to prepare for an MBA, you’ll learn about long-term and short-term tips for making your MBA application stand out from the pack.

Want to learn more about calculating your GMAT score? Use our GMAT score calculator to determine what score you need on the quant and verbal sections to achieve your GMAT goal score.