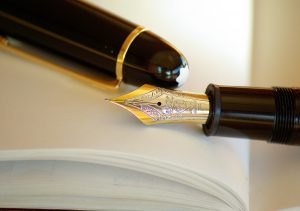 Luckily, we’ve done the research and figured out the answers for you. In this post, we’ll tell you what business schools have to say about the Analytical Writing Assessment, how they weigh it against other parts of your GMAT score and your overall application, and how your score stacks up against other test-taker worldwide. Finally, we’ll help you figure out what a good GMAT analytical writing score is for you.

How Is the GMAT Analytical Writing Assessment Scored?

The Analytical Writing section is graded on a scale of 0-6 in half-point increments. According to the GMAC AWA score guide, 6 is considered “outstanding,” 5 is “strong,” 4 is “adequate,” 3 is “limited,” 2 is “seriously flawed,” and a 1 is considered “fundamentally deficient.” Like the Integrated Reasoning score, the GMAT writing score does not factor into your Total GMAT score, which is why it’s generally considered to be less important.

Your AWA essay is graded once by a human and once by a sophisticated computer grading program called E-Rater. If the two scores are identical or differ by one point, they are averaged to obtain the final score for that essay. If the scores differ by more than one point, an expert human reader will step in and determine the final score.

Graders are trained to consider the following when assigning a score:

Along with your scaled score, you will also be given a percentile ranking, which corresponds to the percentage of test-takers whom you scored higher than. For example, if you scored in the 80th percentile on the AWA section, this means you did better on that section than 80% of people who took the exam. This percentile is based on the last three years of GMAT scores, so if you took the test in 2014, your 80th percentile score would encompass all GMAT-takers from 2012 through 2014.

Thus, while scaled scores are static, percentiles can (and do) change over time. Percentiles help contextualize your scores by comparing them with those of other applicants, and they are assessed by business schools along with the scaled score to see how you measure up.

Below are the current percentile rankings for GMAT Analytical Writing scores.

Remember, there’s no score on any section of the GMAT—even an 800 Total score—that is guaranteed to get you into your top choice business school. Plus, your AWA score is certainly the least influential score one way or the other. Business schools definitely care far more about your Total score, and it’s likely that they care more about your IR score as well. While no part of the GMAT should be neglected, the AWA is the bottom of the GMAT totem pole in terms of your MBA application.

The ultimate takeaway is that a good GMAT writing score is is the one that doesn’t hinder your acceptance into the MBA program of your choice. We say “doesn’t hinder” rather than “gets you into” because the majority of test-takers do very well on the AWA, which makes it hard to get a score that truly stands out. Even if you score a perfect 6, that’s unlikely to be impressive enough to boost an otherwise so-so Total score, or a poor GPA, etc. In fact, the difference between a 5 and a 6 isn’t going to affect your application much, if at all.

Statements from the GMAC itself confirm this: they explicitly advise business schools to “not make distinctions among applicants on the basis of a small scoring distinction—one point or less apart.”

So while it’s hard to stand out, on the other hand, the fact that almost half of test-takers score a 5 or above is an encouraging sign: with just a little bit of prep, you can easily achieve a GMAT analytical writing score of 5 or higher.

One thing to note is that even though the AWA isn’t that important in the grand scheme of things, scoring below a 4 could raise a red flag. Business schools say very little about how they weigh the AWA, but a low score like a 3.5 might signal to them that your writing skills aren’t developed enough to handle the rigorous coursework of an MBA program. More importantly, a huge gap between the writing level reflected in your AWA and the writing level reflected in your application essay is disconcerting in that it calls into question your authorship of the latter.

The GMAC itself advises business schools to “consider that the scores are based on 30-minute, first-draft writing samples” and cautions that these essays “are not comparable to prepared essays that may be submitted with a school application.” The GMAC rather recommends that business schools use the AWA as a “diagnostic tool in recommending or requiring additional instruction in writing,” though it’s unclear how much universities actually carry this out.

In Summary: What’s a Good GMAT Writing Score for Me?

As a baseline, a 5 is considered a strong GMAT essay score. At a 5 or above, you’ll essentially be fine in that your GMAT essay score won’t hinder your application. For the vast majority of schools, a 5 is a good score.

However, if you’re applying to some top 10 business schools, you might want to push yourself further. To be safe, you should aim to score a perfect 6, or at least a 5.5. A 5.5 or above puts you in the top 20%, which is a safe area to be in for the AWA for an elite MBA program.

A 4.5 is generally an “okay” score. A 4 or below puts you under the average, which could hurt you if you’re an international applicant or if your application essay is far better. If you’re scoring 4.5s or below on practice tests, this signals that you could use a little extra AWA prep before taking the GMAT for keeps.

Looking to raise your GMAT essay score? Creating an AWA template is an excellent method.

Also, be sure to read through our essential AWA tips and guide to approaching every kind of GMAT essay prompt.

Jess Hendel is a Brooklyn-based academic advisor, test prep tutor, and content writer for PrepScholar. A graduate of Amherst College, she has several years of experience writing content and designing curricula for the top e-learning organizations. She is passionate about leveraging new media and technology to help students around the world achieve their potential. View all posts by Jess Hendel